"Work Ethic and Determination": The Designer of the "Nanatsuboshi in Kyushu" 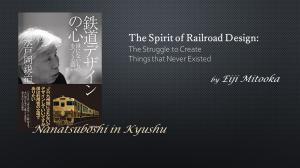 Japan’s "Nanatsuboshi in Kyushu" luxury train has attracted the attention around the world. Here, the vehicle’s designer talks about making the train a reality.

TOKYO, JAPAN, December 13, 2021 /EINPresswire.com/ -- The "Nanatsuboshi in Kyushu" is a luxury cruise train operated by Japan's JR Kyushu that has attracted the attention and interest of travelers from around the world. Here, the vehicle's designer talks about the "work ethic and determination" that helped make the train a reality.

In October 2021, the American magazine Condé Nast Traveler announced the results of its Readers' Choice Awards 2021, and the "Nanatsuboshi in Kyushu" took first place in the railroad train category. The ranking was based on readers' votes concerning travel.

This ranking is considered the most prestigious accolade to be granted by readers through voting based on their travel experiences, and it was announced that over 800,000 readers had cast their votes for the Condé Nast Traveler's Readers' Choice Awards 2021. In addition to railroad trains, other categories such as cities, hotels, and cruise ships were ranked by the magazine.

The "Nanatsuboshi in Kyushu" is Japan's first cruise train, which JR Kyushu began operating in October 2013. It is a one-of-a-kind railroad experience that integrates the skills and spirit that characterize the culture of Japan's island of Kyushu, and it has attracted a large number of reservations from Japan and overseas despite having just 12 cabins. The concept behind the train is "a journey to encounter a new life."

Nikkei BP published a book titled "The Spirit of Railroad Design: The Struggle to Create Things that Never Existed" in 2015, in which Seiji Mitooka, the designer of the "Nanatsuboshi in Kyushu" and many other railroad-related projects, reveals his efforts to create trains and stations that had never before been seen by the world.

This valuable text was written by Mr. Mitooka with the intention of explaining, for the final time (aside from books such as those in his design collection) his work philosophy and way of thinking.

"Is it possible for me to conduct design work without being present next to the JR Kyushu railroad tracks? I want to stand in the user's shoes." By so doing, the author persuades his clients - railroad companies, rolling stock manufacturers and the Ministry of Land, Infrastructure, Transport and Tourism - to accept what he thinks are the best solutions to meet their needs. In the process, he admits, he sometimes comes to change his own concepts and ideas.

Mr. Mitooka describes the work of a designer as "taking in the customer's demands, negotiating, compromising, managing the budget, cutting prices, issuing invoices and crawling around on the ground to bring something new into being." It's not like being an artist, he explains, where one has to give birth to something based on what comes out of the creator. Rather, it is a task that is very similar to the work performed by engineers and designers. As such, Mr. Mitooka believes it should be associated with the Japanese term monozukuri, which is often used in connection with concepts like "craftwork" or "manufacturing." The perspective is one that always focuses on the experiences of those who ride the trains and use the stations in question.

The book also mentions Mr. Mitooka's work in 2015, including JR Kyushu's "Aru Train" and the renovation of Oita Station. It devotes a large number of pages to describing the truly collaborative process of manufacturing together with the many craftspeople who work on the interior and exterior of the train cars and related items, including Kakiemon Sakaida XIV, who was in charge of the washbasins for the Nanatsuboshi. While there are many hints and tips scattered throughout the book that can help the reader prepare for his or her own work, it is also a text that offers a rich and telling behind-the-scenes look at railroad design.

The book described here is one of the unique, high-quality publications offered by Nikkei BP. We cover a wide range of fields, from business skills useful for career opportunities and professional fields related to technology to lifestyle categories such as health and culture. We are keen to see our books published in other languages and welcome requests from publishers, agents and companies interested in translation licensing.

Please contact us for more information on the foreign rights to our uniquely positioned and unmissable books.