Unlocking a Global Web of Secrets and Conspiracy 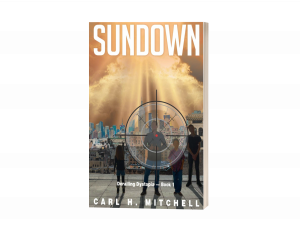 YORBA LINDA, CALIFORNIA, UNITED STATES, July 28, 2022 /EINPresswire.com/ -- How far will you go to unlock a mystery? What happens when your ‘call of duty’ takes you to the unimaginable discovery of truths that could change the fate of America and the world?

Well, you too might go beyond your limits. But the question is: what happens when all that it takes to open this web of secrets is to put your life on the line?

An amazing saga written by rising author Carl Mitchell entitled, “Sundown: Derailing Dystopia”, starts its story in the year 2057 when the world is starved of oil and the whole world is in the unrelenting grip of the World Council.

NYCPD detective Nick Garvey has his plate murderously full, contending with: the assassination of the Vice President and four Secret Service agents; the vicious power struggle between President Lenora Allison and the Supreme Leader of the World Council, Jason Beck; the off-duty avenging of the brutalization of his estranged daughter by her live-in thug; the kidnapping of his granddaughter when he gets too close to the truth about Jason Beck's world-domination dirty tricks; and his confrontation with President Lenora Allison which leads to their joint setup in front of a firing squad.

But more is about to happen. The more Nick Garvey digs deeper for the truth, the more he discovers that the mystery is too deep – and this will keep you wanting more.

Author Carl Mitchell, California-born, has written several short stories. "Sundown: Engineering Gives the Devil a Sunburn," published by Covenant Books, is his first novel, a near-future police procedural with thriller, mystery, espionage, and dystopian aspects. There are also Science Fiction touches. He writes to
entertain and challenge his readers.

Visit www.CarlHMitchell.com for a synopsis and a short video.

“Sundown: Derailing Dystopia” is now available on Amazon and other digital bookstores worldwide.

Launching brilliant stars into the spotlight! Inks &amp; Bindings is set to broaden horizons, revamp to perfection, and produce a masterpiece through the power of books.

Inks and Bindings is a premier self-publishing company located at the heart of the Golden State. Aptly based where fashion, entertainment, and culture thrive, the team goes all out in bringing independent
authors into the sweet California spotlight.