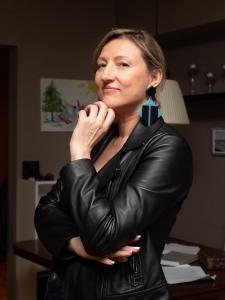 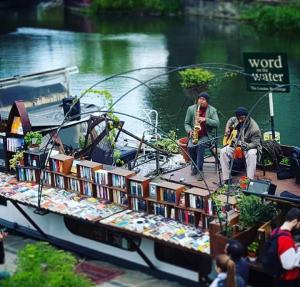 Word on the Water Book Barge

The standup comedy show is on 5th of July at The Word on the Water Bookbarge in Camden.

Everything I earn from my book will go towards a Ukrainian a refugees organisation. The war started the day after my first standup comedy book launch. I’ve been raising funds for Ukraine ever since”
— Yulia Pylyavskaya
LONDON, UNITED KINGDOM, June 7, 2022 /EINPresswire.com/ -- Ukrainian novelist and standup comedian Yulia Pylyavskaya launches her book “Adventures of a Big Girl in a Flat City” in the form of a standup comedy show on 5th of July at The Word on the Water Bookbarge in Camden.

She will be joined by a talented line-up of comedians, who will either share their own experiences of growing up, roast the author or talk about characters from the book in sets they have specially prepared for the night.

“Everything I earn from my book sales will be going towards a Ukrainian refugees volunteers organisation. The war started the day after my first standup comedy book launch in Barcelona and since then I have been raising funds for Ukraine with every book I sell,” Yulia says.
“Yulia has stand-up and sit-down skills: she recently published a debut novel, Adventures of a Big Girl in a Flat City, "a comical portrait of a post-soviet dysfunctional society of the '90s, in those times of no feminism, no war, no communication skills.” (“Si Hawson, “The British Comedy Guide”, full interview: https://bit.ly/3MotMdE).

“Being a teenager during the post-Soviet Union era you had absolutely no access to any kind of sexual education. I still feel for teens growing up in suppressive cultures. Especially females, where any kind of curiosity they show on the subject is ridiculously slut-shamed. I guess, my plan to write my own book of mocking the sexually suppressive society was born and formed thanks to DH Lawrence and his “Lady Chatterlay’s Lover”. Ironically, later I did my MA in Comparative Literature in Nottingham, where he had also studied”, Yulia says.

Among the comedians will be Sam Jones (“Sam has a wonderfully natural, warm style. She turns the everyday into hilarious stories that will always leave you wanting more” - Chris Groves), Aisha Amanduri ("An innocent face but a quippy daring comedian” – someone from the audience), Dominic Fraser (“One of my favourite British acts with a huge future ahead of him” - Austin Branson), Drue Fitzerald (“Isn’t Drue a guy’s name?”- everyone), Tim Thompson (“Detached from the majority… strong writing” - Chortle), Vash Pernicar (“Vash is my favourite comic” - Lewis Schaffer), Vlad Ilich ("Vlad is playful, charming, intelligent and very funny" - Luke Toulson), Mike Strogi (“Gave [our] show an explosive start” - Kyle Wallace), and Brighton-based comedians: Dan Fardell ("One of the best new joke writers I've seen" - Romesh Ranganathan) and MC Nik Coppin ("Fast and funny" - Adelaide Fringe).

Manager of the The Word on the Water Book Barge Paddy Screetch said: ”We are really looking forward to hosting this very worthwhile event. A stand up comedy night to launch a novel sounds unique and fun, and hopefully we can raise funds to help support the people of Ukraine."

"Adventures" is at 7:00pm on Tuesday, July 5th at the Word on the Water Book barge, address: on the Regents canal in the Kings Cross area (link) with doors open from 6:30pm. Entrance is free.