This Fall, Rise to the Occasion and Unravel the Mystery with The Phoenix of Upperville 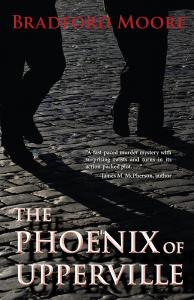 America’s capital is rife with history, politics, intrigue, and—death? When a junior senator from Indiana is found unexpectedly deceased, and his death ruled a suicide, his sudden end kicks off a tale of scheming DC politicians, greedy developers, a black-sheep detective, an ambitious lawyer, and a northern Virginia estate in the small town of Upperville, where the past—unlike the senator—is not dead.

A fast-paced murder mystery filled with daring twists and turns, The Phoenix of Upperville is scheduled for release on September 7, 2022.

When Senator J.A. Burnside is found dead in his penthouse, the police rule it a suicide. However, Detective Arch Williams isn’t convinced, and decides to dig deeper. Meanwhile, Tradd Mashburn, a young attorney, comes across a seemingly run-of-the-mill historic preservation lawsuit coupled with an amicus brief so passionately written that he must meet its author.

Burnside’s death and the lawsuit point to a conspiracy so grand and secretive, it appears impossible to unravel. Tradd’s and Arch’s respective investigations bring them together unexpectedly, taking them across Virginia and deep into its culture. Together, they grapple with the reverberations of Southern history that linger in our modern times—and attempt to uncover the truth behind Burnside’s death and the apparently benign lawsuit.

About the Author
Bradford Moore is a native of Richmond, Virginia. He holds a BA from the University of Virginia and a JD from Louisiana State University. The Phoenix of Upperville is his first novel.

Brandylane Publishers, Inc. is an independent press located in Richmond, Virginia, that has published books since 1985.
___________
The Phoenix of Upperville (paperback, 436 pages, $23.95) is available for pre-order from Amazon, Barnes & Noble, and other fine booksellers. Kindle e-book (retail $4.99) forthcoming.