The Two Conditions To Unconditional Happiness 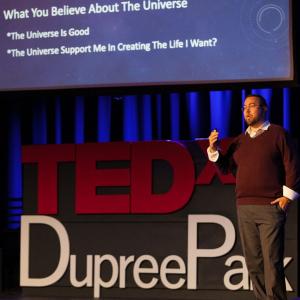 Moshe Gersht, author of the Wall Street Bestseller It’s All The Same To Me, a thought leader and speaker at TEDxDupreePark, delivered a TEDx Talk, entitled “The Two Conditions To Unconditional Happiness”, at the annual live show on November 5 at the Woodstock Arts Center in Woodstock, GA. “The Two Conditions To Unconditional Happiness” is now live on YouTube and poised to make an impact worldwide. This year’s TEDx DupreePark theme, Seeding Greatness, stems from an ancient Greek proverb which states, “Great societies flourish when elders plant trees they know they will never sit under.”

Wall Street Journal bestselling author, Moshe Gersht, is a spiritual teacher and emerging thought leader. After spending nearly a decade as the singer songwriter for a pop punk band in Los Angeles, Moshe made the life changing decision to pursue a life of spirituality. The next fifteen years were spent in intense study, meditation, and prayer. Deepak Chopra called his most recent book titled It's All The Same To Me: A Torah Guide To Inner Peace and Love of Life "a contribution to the world's enlightenment." Moshe understands the true nature of the human mind and our collective struggles and has devoted his life to helping people align with their purpose, peace, and inner joy. Today Moshe shares his wisdom through his writing, lectures, and videos on social media.

Moshe Gersht’s specific talk is published and can be viewed here at https://youtu.be/sdE4KPcIrBw

Steven Monahan is the creator and licensed Organizer for TEDxDupreePark. Gina Carr is the Curator and CEO. Daryll Stinson is Director of Operations. LaRhonda McClain is the Event Manager. For more information visit www.TEDxDupreePark.com

TED is a nonprofit organization devoted to Ideas Worth Spreading, often in the form of short talks delivered by leading thinkers and doers. Many of these talks are given at TED conferences, intimate TED Salons and thousands of independently organized TEDx events around the world. Videos of these talks are made available, free, on TED.com and other platforms. Audio versions of TED Talks are published to TED Talks Daily, available on all podcast platforms.

TED's open and free initiatives for spreading ideas include TED.com, where new TED Talk videos are posted daily; TEDx, which licenses thousands of individuals and groups to host local, self-organized TED-style events around the world; the TED Fellows program, which selects innovators from around the globe to amplify the impact of their remarkable projects and activities; The Audacious Project, which surfaces and funds critical ideas that have the potential to impact millions of lives; TED Translators, which crowdsources the subtitling of TED Talks so that big ideas can spread across languages and borders; and the educational initiative TED-Ed. TED also offers TED@Work, a program that reimagines TED Talks for workplace learning. TED also has a growing library of original podcasts, including The TED Interview with Chris Anderson, WorkLife with Adam Grant, Far Flung with Saleem Reshamwala and How to Be a Better Human.