The Los Angeles Times Festival Of Books of 2022 presents, The Poison Factory 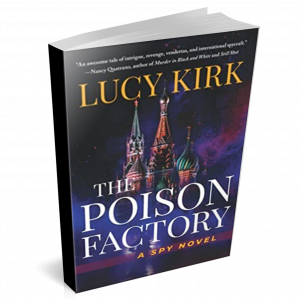 Can Claw Marks and White Powder Catch a Killer?

“The only clues are claw marks and an unidentified white powder.” —”
— Lucy Kirk

LOS ANGELES, CALIFORNIA, UNITED STATES, June 30, 2022 /EINPresswire.com/ -- Retired CIA Lucy Kirk releases her suspense and mystery filled novel titled The Poison Factory that will keep readers on the edge of their seat deducing each of the character's interactions in every scene. The book received numerous praises and positive reviews on Amazon and other online booksellers' websites. The Poison Factory opens a world of international espionage and delivers a page-turning story of a capable and independent heroine involved in an unexpected mission.

The Poison Factory centers on the story of CIA officer Decktora Raines who is on leave from her job, trying to escape memories of the agent she lost and the disappearance of her life partner, Alex. But when a Russian defector reaches out of the blue, she finds herself in London and finds out that a Russian emigre has been murdered, and the only clues left by the killer are claw marks and an unidentified white powder. The bodies pile up, and the police and the general public fear that a serial killer is on the loose. But Decky and her defector are convinced that it is the work of the Russians. And as the claw

PRESS RELEASE | LA BOOK FAIR 2022
murders increase, with some of Decky’s contacts falling victim, she must put the memories behind her and rely on finely-honed instincts to find the killers and figure out what they have to gain — and how to stop them from killing again.

“ This is a masterful, well-written book. The story is captivating, descriptive, suspenseful and made you feel like you were actually there, feeling every emotion and visualizing experiencing every plot/action that was taking place ” — H.M. Retired Airlines Official.

“ This book is terrific. It’s a page-turner that I couldn’t put down. The author certainly knows what she wanted to say and makes the story an adventure. I would recommend this book to anyone interested in reading a great story ” — Amazon customer review.

“ Readers and fans of spy thrillers are going to love this new book by Lucy Kirk. This author is one to keep an eye out for to enjoy other books she has written ” — Goodreads customer
review.

Lucy Kirk was a former CIA Directorate of Operations and Chief of Station before her retirement. Her 30 years of experience specializing in the Soviet Union and later Russian affairs, inspired her to write her first novel, The Poison Factory. Lucy currently teaches courses in espionage and The Cold War in her current home of New York City.

Lucy is also an intelligence expert who has written for publications extensively on the
subject. She graduated from Wellesley College and earned her graduate degree from
American University’s School of International Service in Washington, D.C.

Book copies are available at Amazon and other online book resellers.