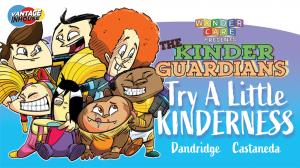 Meet the Kinder Guardians -- learning to be the heroes of TOMORROW! 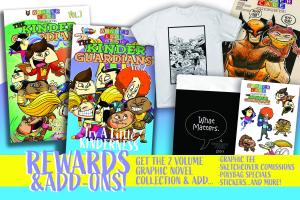 With your pledge, you can add THESE exclusive items to YOUR collection!

With our first volume, we really focused on introducing the class and their superhero school. In vol. 2 we’re rewarding our longtime fans with new stories, with deeper serialization and continuity.”
— Victor Dandridge

COLUMBUS, OH, UNITED STATES, July 12, 2022 /EINPresswire.com/ -- “It’s so hard to say goodbye…” But with the completion of the TENTH (10th) issue of their hit, award-winning comic series, Wonder Care Presents: The Kinder Guardians, that’s exactly what indie comic creators, Justin Castaneda and Victor Dandridge, aim to do. Albeit, in the BIGGEST way possible.

On July 9th, 2022, the duo will bring their pint-sized heroes to famed crowdfunding platform, Kickstarter for the first time, giving fans — both old and new, a chance to collect the entire series in two (2) graphic novel volumes.
Who ARE The Kinder Guardians?

Horus. Pep. Castor. Pollux. Lectron. SunMoon. Cub. Sons and daughters of the world’s GREATEST superheroes, sharing in their own misadventures. Led by their teacher, Ms. Teri and the sentient computer system, BlackBoard, at a school for the gifted, they’ll learn the power of teamwork, while becoming the heroes of tomorrow!

Starting with a simple premise: “Muppet Babies Meets the Justice League”, The Kinder Guardians have earned a dedicated following since their debut in 2014 with the inaugural issue, “How Far is Up?!” Published in print and online (wondercareafterschool.tumblr.com), Wonder Care Presents carries the torch of classic Saturday morning cartoons, pitting its colorful cast of heroes against self-doubt, sleep monsters, and dimension-hopping doppelgängers. With a move to Kickstarter, the goal is to expand readership, and fund the release of a new trade paperback that collects the second half of the comic series.

“With our first volume (“Some Kinder Wonderful” featuring issues 1-5), we were really focused on just introducing the class and the environment of their superhero school.” Says writer Victor Dandridge. “It was about building. I’m still amazed to realize the brilliant stories we were able to tell before even revealing the full roster (Wonder Care #4 “The New Kid”).”

He continues, “In this new volume, “Try A Little Kinderness,” we’re rewarding our longtime fans not only with new stories, but adventures with deeper serialization and continuity. The scale of this arc is unquestionably BIGGER, doubling the character and team counts from the first five issues!”

The Kinder Guardians Kickstarter campaign is FULL of exclusives! A remastered edition of Some Kinder Wonderful features a brand new cover for the 2016 Free Comic Book Day adventure, as well as introducing a new addition to the teaching staff, Mr. Tree.

The new volume, Try a Little Kinderness, features previous releases “No Good Deeds” (issue #6), “Show And Tell” (issue #7), and the critically acclaimed social commentary issue, “What Matters: A Wonder Care Story. But new fans and long standing ones alike, will get to experience the thrilling, three-issue, series finale TOGETHER.

New chapters, “Switcheroo” and “Tag: The It-Game parts 1 & 2” (issues 8-10, respectively), close out the title with a “HARE-raising” adventure. The introduction of cosmic allies and adversaries, will make this a MUST-HAVE for 1st Appearance aficionados

Wonder Care Presents: The Kinder Guardians is an award-winning, creator-owned comic series, published exclusively by Vantage:Inhouse Productions. Use images included in the press kit; more may be furnished on request. For more information visit the Kickstarter campaign: HERE or reach out to Victor Dandridge at the email above.