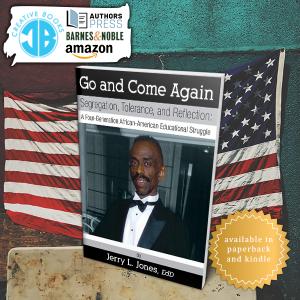 LOS ANGELES, CALIFORNIA, UNITED STATES, July 8, 2022 /EINPresswire.com/ -- Even though the Supreme Court decision of 1954, Brown v. The Board of Education ruled that racial separate school systems should be ended, it was not until 1965 that this happened in Washington County, Virginia, where Jerry Jones was born. Moreover, the shortcomings of public school education for African-Americans existed for generations. In his book, Go and Come Again: Segregation, Tolerance, and Reflection: A Four-Generation African-American Educational Struggle, Jones details the public school experience of his grandmother’s generation, his mother’s, and his. He shared his family tree’s history and culture.

Being a teacher in a fast-changing era of computer advancement, Jones devotes significant attention to his desire for graduate study and other opportunities for continuing his education. He analyzed factors to many successes of Southwest Virginia people who left their hometown areas for education and employment.

“An interesting look at growing up in Southwest Virginia from the eyes of the author.”
— Amazon customer review

“Good read. Both my husband and I read it and passed it on to other family members who have read it.”
— Amazon customer review

Born in 1947 in Glade Spring, Southwest Virginia, African-American Dr. Jerry L. Jones attended public schools during segregation. He earned a bachelor’s and a master’s degree from Virginia State University and a doctoral degree from Virginia Technical. First, his teaching career as a high school teacher in Baltimore in 1969. Then, he became a professor at J. Sargeant Reynolds Community College in Richmond in 1974.

Returning to his hometown in 2001 to take care of his elderly mother, Jones is currently a professor at Emory & Henry College, which is near only his home. With nearly sixty years in education, both as a student and as a teacher, Jones provides a unique perspective about society, education, and minority status in America — past and present.

With fifty years of experience as a teacher, Jones wrote his book as a tribute to many African-Americans who faced hardship in their pursuit of education. The stories about his family may not be overly unique. However, these stories are representative of the time and the geographic location. In the early years of the 20th century, the education of Negro children in most Southern school districts was not a priority. It was a case of a separate and unequal situation that took decades and federal intervention to remedy.

Book copies are available at Amazon, Barnes & Noble, and other online book resellers.