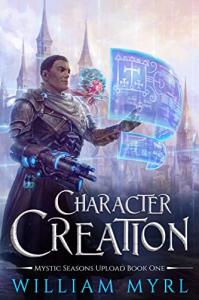 "Character Creation" is tailor-fit for fans of role-playing games and science fiction alike.

I love this book…The pacing, action, depth of world-creation, and tongue-in-cheek irreverence of the characters felt like a home where I'd like to live.”
— Robert Pollock, Prison and Justice Writing Program Manager, PEN America
UNITED STATES, August 18, 2022 /EINPresswire.com/ -- William Myrl has signed a three-book contract for his LitRPG series, Mystic Seasons Upload, to be published by Shadow Alley Press, a rising star in the world of genre fiction.

What is Character Creation about?

Hollen is an artificial intelligence searching for a way to escape a game server scheduled for shut-down. He issues a quest to a new player, and together they explore hidden aspects of the digital world, but Hollen isn’t the only AI trying to stay alive. An in-game deity has developed a virus to infect players and propagate itself into the real world. Can Hollen find a new home before the server crashes or the moderators delete them all?

William Myrl was a high-school dropout who was confined to prison by the age of nineteen. In his early twenties, he was diagnosed as bipolar and began taking medication and participating in treatment for this disorder. After nearly thirteen years of incarceration, he was granted a conditional pardon by the governor of Virginia, effectively reducing his sentence to time served.

While incarcerated, William Myrl was published in REED magazine, CURA, and several PEN anthologies. He has been awarded seven prizes in various categories by the PEN Prison and Justice Writing Program.

This book is available for Kindle pre-order on amazon.

Character Creation will be available as an E-book, paperback, audiobook, and through Kindle Unlimited as of 9/6/2022.