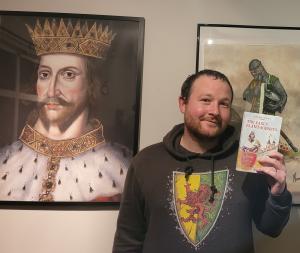 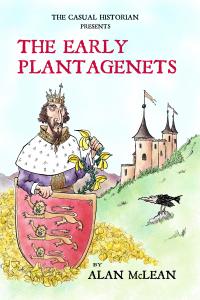 Cover of 'The Casual Historian presents The Early Plantagenets'

Interview with Alan McLean, author of 'The Casual Historian presents The Early Plantagenets', describing his motivations and wider interests

The Early Plantagenets is a light hearted look at the dynasty . They ruled from 1154 – 1485, possessed a hair trigger temper and engaged in more backstabbing than a Game of Thrones season finale.”
— Alan McLean
LONDON, UNITED KINGDOM, December 9, 2021 /EINPresswire.com/ -- Tell us about The Early Plantagenets?

The Early Plantagenets is a light hearted, irreverent look at the dynasty of the same name. The Plantagenets ruled from 1154 – 1485, the family possessed a hair trigger temper that sparked multiple major wars and they spent a lot of their time engaging in more backstabbing than a Game of Thrones season finale.

Who is The Casual Historian?

Turns out, there are an awful lot of Casual Historians out there. If you’re reading this, congratulations, you might well be one!

If you find yourself visiting medieval sites and breathing in the heady, middle-aged air in your own mind as you walk the battlements, however, when you buy the well-researched book from the heritage gift shop you never finish it, you’re almost definitely a Casual Historian.

If you want to read about History, but don’t want to be bombarded by names, dates, or endless, relentless footnotes, you could well be a Casual Historian – you probably are in fact. In short, if you’re into History for the story, you’re a Casual Historian and will enjoy the book.

What qualifies you to write history?

This was quite a sticky point and one that nearly caused the book not to be published. Almost all publishing houses will insist on you answering the question when submitting a factual book, “What qualifies you to write about this topic?” It’s a fair question, particularly with History, for a long time the world of Historical writing has been a closely guarded one, usually by people with a series of letters after their names – it doesn’t have to be this way though.

I’m dodging the question a little with this rant… in short, nothing qualifies me to write on this topic. In fact, you could even say the opposite is true. I got a “D” in History A-Level and it was suggested it would be for the betterment of the entire field if I did not continue my work in this discipline.

How did it come about? What interested you in this subject? What inspired the idea for your book?
I was hired back in 2019 to write for International Ghost Walking Franchise, Mysterium Tours. The company relied heavily on tourists and with lockdown, this work stopped. I still liked writing though, I also liked the Plantagenet period. I wanted to write a novel based on the period but quickly decided the real (hi)story was far better than anything I could come up with. What has resulted is a docudrama record of the period.

Who are the main characters?

Often History books can over do it with characters. It’s all very impressive we know the name of every minor lord and lady that attended some meeting of inconsequence on goat taxation in the 1100’s, but do we really need to list them all? It makes it very confusing for the reader.

The main characters you may of heard of but perhaps not know too much about are; Thomas Becket, Eleanor of Aquitaine, Richard the Lionheart and King John.

Some of the characters people generally haven’t met before but become quickly fascinated with are William Marshal, Henry II, William the Lion, The Young King Henry and Eustace the Mercenary Pirate Monk.

Like sitting in the passenger seat of your own car, the Past is simultaneously the most familiar place you can visit and yet also the most alien. I can identify with all of the characters’ motivations in the book at times; a need to control things, love, ambition, hunger - who can’t identify with these things every now and then?
The Plantagenets really let themselves down though in how these feelings manifest into actions, you have drownings, castrations, brutal civil wars with family that stretch across the continent and kill a lot of people. They’re a difficult group to identify too closely with.

Would you and your main character get along?

I’d like to go for a beer with William Marshal, though he is not the main character.

How long did it take you to write this book? Did you have to do a lot of research?

The book took around a year and a half to write. A few proper Historians have now read The Early Plantagenets and have been shocked at the amount of research I did, to be honest, so am I. It’s an unfortunate reality of writing such a book that you have to read through a fair bit of mundanity to extract stories you think will keep your audience engaged.
Historical Heavyweight author Stewart Binns, who beautifully brings the past to life through his prose read through all of it and thought it was rather good. He was even kind enough to write the foreword for me.

What is next for you?

The reaction to The Casual Historian concept has been incredible, it turns out people like the idea of wrestling history back from heavy academics and making it more accessible to you and me.

I’ve set out to find the next period to cast a casual eye over, unfortunately, it turns out when you dig deep enough it’s seriously difficult to discount almost any period – turns out mental things seem to happen all of the time, particularly to the royal elite. I’m sure there’ll be meetings with Chiselbury to discuss this further, watch this space.