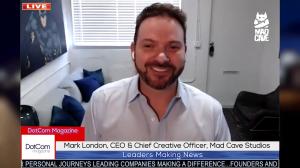 The Power Of Zoom Interview Issue

Established in 2014, Mad Cave Studios is an independent comic book publisher from Miami, Florida driven by madness and committed to creating the most fun and diverse comics on the market.

With our roots founded in a medieval fantasy world, every Mad Cave series is incepted by us before it is filtered through the feedback of our readers. We attend multiple conventions each year to talk with our fans and learn what they are excited about.

The result is a comic book experience that is second to none, transporting our readers to a world that comes to life with beautiful artwork and a story that carries a hidden, purposeful meaning.

Every single person hired by Mad Cave Studios carries a passion for the industry. Our writers, editors, artists, graphic designers, marketers, and PR/Communications professionals are all dedicated to this work.

Mark London joins other leading CEO’s, founders, and thought leaders that have participated in this informative and popular interview show. In the interview with Andy Jacob, Mark London discusses the newest offerings of Mad Cave Studios, what makes the company different than other firms, and shares thoughts on leadership and entrepreneurship. Mark London joins other leaders building strong and compelling companies that have been invited to participate in the exclusive series

Andy Jacob, CEO of DotCom Magazine says, “The interview with Mark London was amazing. The success of Mad Cave Studios is a true testament to their team and their people. It was a real honor to have Mark London on the video series.

Andy Jacob says, “It’s the goal of DotCom Magazine to provide the absolute best in what entrepreneurship has to offer. We have interviewed many of the world’s leading entrepreneurs in their respective field. It takes amazing leadership to build a company like Mad Cave Studios. There are so many powerful and talented entrepreneurs throughout the world, and I am extremely fortunate to interview the best of the best. I always come away humbled by how many talented people are building amazing companies. As we scout the world for interesting entrepreneurs and companies, it is always a wonderful experience to meet leaders like Mark London who are forging an incredible path for others. At DotCom Magazine, we believe entrepreneurs are the heartbeat of the world. We believe it is a world where risk takers must be lauded, saluted, and respected. Successful entrepreneurs get up every morning and give an amazing effort. We salute the business leaders of this world like Mark London”.