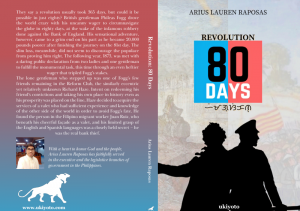 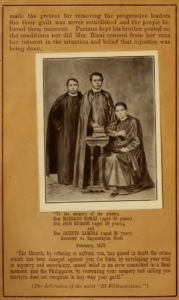 Filipino historian Arius Lauren Raposas delivers with his latest book Revolution: 80 Days a riveting story of reform and redemption for the 1872 Cavite Mutiny.

TOKYO, JAPAN, August 5, 2022 /EINPresswire.com/ -- “The revolution will not die today. Hiraya manawari.” Multi-awarded Filipino historian Arius Lauren Raposas delivers with his latest book “Revolution: 80 Days” a riveting story of reform and redemption for the sole survivor of the 1872 Cavite Mutiny.

This protagonist, a soldier turned migrant worker, believed he was the only one left to carry the ideals of the Gomburza, an acronym for three Filipino priests (Gomes, Burgos, Zamora) who were slain by Spaniards due to being implicated with the mutiny.

Featuring a global cast, the historical novel attempts to properly place the importance of developments in the Philippines during this time in the context of international affairs.

“As a student of history and the social sciences, I have been mystified by the events of 1872. Teodoro Agoncillo called it ‘the beginning of Filipino nationalism.’ Likewise, Jose Rizal placed the events of 1872 in high regard,” said Raposas, who also stated that his conceptualization of the work’s key points began as early as 2016.

He was referring to National Scientist Teodoro Agoncillo, who once wrote, “There is no Philippine history before 1872.” Yet today, many have forgotten the legacy of this watershed period for Filipino nationalism, highlighted by recent controversial issues such as “Majoha.”

Former University of the Philippines Diliman Chancellor Michael L. Tan thus lamented in one of his columns with the Philippine Daily Inquirer, “There’s so little effort to commemorate the 150th anniversary of Gomburza.”

Raposas, on his part, believes the timing for his book could have not been more impeccable, which has been a finalist in the New Adult Category of Lampara Prize 2021.

Besides the protagonist’s homeland Philippines, Japan has also figured significantly in this excellent blend of adventure, economics, politics, and historical fiction.

“The plot took example from Filipino migrants in Japan such as Artemio Ricarte and Jose Ishikawa Ramos,” according to Raposas, carefully using the characters’ respective native languages in their dialogues when possible.

“Even if it is historical fiction, intensive research is necessary. I did not spare anything to ensure this work, years in the making, will stand up with the best in the world,” Raposas added.

Speaking of historical accuracy, while many of the characters are obviously historical figures, is the protagonist one of them?

“Not really,” explained Raposas, “although you may think of it more precisely as a composite of various inspirations. Using creative license, so to speak. What is more important, I believe, is where we draw the line between fiction and reality.”

With a heart to honor God and the people, Arius Lauren Raposas has faithfully served in the executive and the legislative branches of government in the Philippines. He finished a bachelor’s degree in history (magna cum laude) and a master’s degree in public administration (thesis track) at the University of the Philippines Diliman. Besides his academic and research work, he has authored a number of literary works through the years, a roster that includes Code Antony (2010), Run to the Sky (2017), Countdown to Inferno (2020), Kotabahara: The City of God (2020), Muni: Dream Princess (2020), and Revolution: 80 Days (2022). He has shared knowledge related to his expertise through national and international media appearances. In addition, he has established a humble presence in social media, where his history website called Filipino Historian (2012) reaches approximately a million people each day on average.

Note: This press release is prepared and distributed by Maria Tachibana (m.tachibana723@gmail.com)