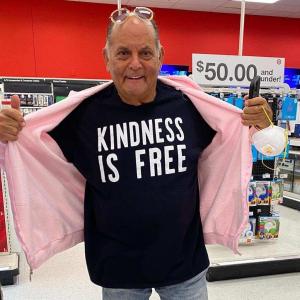 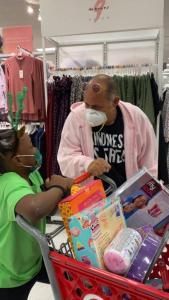 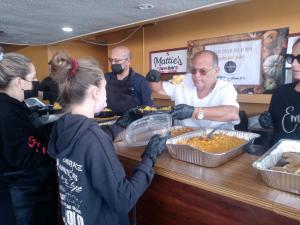 The annual holiday festivities included a Target shopping spree and a tour and lunch at the Miami Children's Museum.

His support has enabled us to expand the program and services to schools in need as well as implement community initiatives that support the homeless and families in crisis.”
— Embrace Girls Founder and CEO Velma Lawrence
MIAMI, FLORIDA, USA, December 24, 2021 /EINPresswire.com/ -- It has been one year to the day since Steven Gurowitz, president and CEO of the luxury design firm Interiors by Steven G, was introduced to Velma Lawrence and the Embrace Girls Foundation.

The designer was looking for a local group to support. A colleague, ABC News affiliate Local 10 Public Relations Director Mayte Padron, thought Embrace Girls was a natural fit, made the introduction and suggested Gurowitz support their annual Christmas Party.

By the time the 2020 party ended Gurowitz pledged to support the group anyway he could.

“We decided to embrace the Embrace Girls because we love what these children stand for, and the fact that many of them have overcome tremendous adversity in their lives,” he later said. “The things we take for granted in our lives mean so much to other people who don’t have them.”
A year later and Gurowitz has been more than a man of his word.

Over the last 12 months, he has:
• Sponsored a Valentine’s Day picnic, surprising the girls with custom bikes, knee pads and helmets.
• Sponsored a series of “Intimate Evenings With” benefit concerts for Embrace at the Casino at Dania Beach. Each of the performances, Soul singer Jeffrey Osborne (June), actors and gospel music icons David and Tamela Mann (August), and R&B crooner Gerald Alston and the Manhattans with singer and actress Regina Belle (December) sold out weeks before the performances and have helped make the “Intimate Evening With” shows a must-see event for South Florida music lovers.
• Served food at an Embrace Thanksgiving event he funded to feed the homeless.
• Visited Embrace program schools and toured neighborhoods where they live.
• Recruited friends to join him in supporting Embrace Girls, including millionaire Miami developer Joseph Milton, who, with his wife, Alexandra, have attended Embrace Girls’ signature tea parties and hosted a tour of one of their office buildings that included a private movie screening. The Miltons have also made frequent donations of children's and adult clothing, furniture, toys and shoes.

• Gurowitz’s support has allowed Embrace Girls to expand its services across Miami-Dade counties, from Dania Beach to Homestead, providing weekly during and after school programming for hundreds of students.

“Mr. G is the gift that keeps on giving,” Lawrence said. “His generosity extends far beyond the monetary. The time he dedicates to the girls and the concern he shows for their overall wellbeing is truly priceless.

“His support has enabled us to expand the program and services to schools in need as well as implement community initiatives that support the homeless and families in crisis.”

“My principal said she had an amazing program that she wanted me to spearhead at the school,” Reina said. “I was thrilled to find out about Embrace, because last summer I saw the program on Instagram and saw their tea party. For my principal to come knocking on my door and tell me about it, that says it was meant to be.
“I fell in love with it.”

Reina, who not only grew up in and still lives in Miami’s Liberty City neighborhood but also attended McCrary (then Little River Elementary School) as a child, said she has seen the difference Embrace programs have made in the 14 girls at McCrary – including her daughter, Jasmine Smith, a McCrary fifth grader.

“My students absolutely love Embrace,” Reina said. “You can see it in their faces, in the things they do, in the way they carry themselves. They needed this. I have students and parents asking all the time if they or their children can join Embrace.”

Founded in 2000, The Embrace Girls Foundation Inc., is a non-profit that provides uplifting, girl-centric programming for hundreds of girls in several public and private elementary and middle schools in Miami/Dade and Broward counties.

Lawrence, knows the girls challenges firsthand. She also grew up in Liberty City and founded Embrace “to help young girls become the women they choose to be by giving them encouragement and opportunities I did not have or even knew existed growing up.”

Gurowitz and his ‘Interiors Team,’ Maria, Sierra, Greta and Linda, marked their Embrace anniversary by taking more than 50 Embrace Girls on a Christmas shopping spree to a Target Department Store.

“We got a wish list from every child, so they got not only got to pick what they wanted, they also got bags filled with things from their wish list,” Gurowitz said.
The shopping spree was followed by a Miami Children’s Museum play tour, lunch and a visit by Santa Clause.

“At the end of the day, I was mobbed by a group of smiling kids,” Gurowitz said. “How can you put a price on that?”

Gurowitz praised Lawrence and the Embrace Girls staff, many of them program graduates.

“To see Velma Lawrence, who has given twenty years of her life to this amazing organization and now has programs in schools from Homestead to Dania Beach, well, I am honored to stand toe to toe with her to get this done,” he said. “If I had been doing this as long as she has, I would be on medication.”

Gurowitz said, while he is happy to have helped Embrace grow, he is just “embracing my passion. I have been blessed. I am not a godly person, but I think God has a plan, and I am honored to follow that plan.

“Many people talk the talk, but there are few who walk the walk.