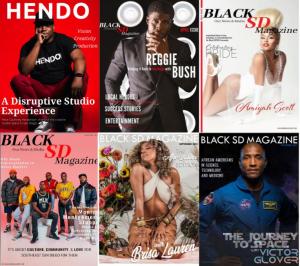 SAN DIEGO, CALIFORNIA, UNITED STATES, November 21, 2021 /EINPresswire.com/ -- Black SD Magazine was started by CEO and Publisher, Michael Cox in 2020 during the onset of the global pandemic. He wanted to create an African American Lifestyle magazine that spoke to the wide range of African Americans. It was his goal to create something that told, highlighted, and featured the community in ways that illustrated we aren’t monolithic.

The first print issue for the magazine was designed and published in December of 2020. As the first print African American magazine in San Diego, the company received a Proclamation from former Mayor of San Diego Kevin Faulconer. It was Michael’s goal to bring back an African American monthly magazine. After the release of the next two issues, which featured on the cover Reggie Bush (April) and Amiyah Scott (July) Michael Cox signed a 12 month contract with his print company. The recent October Issue featured Astronaut Victor Glover on the cover.

The company is celebrating its anniversary and first official year in business with the launch of it’s digital version of the print magazine. The print copies will always be available, but digital will be a way for Black SD Magazine to expand to a larger audience quicker.

Cox is offering it for free to sign up for the first year because he wants everyone to enjoy these amazing stories of African Americans. The goal is to get thousands of individuals to sign up so that everyone featured can get the shine they deserve as well as continue to spread the positive message and narrative of our community.

In each issue readers will enjoy amazing stories from celebrities to local individuals showcasing black excellence. Some issues are special editions for our communities such as our LGBTQIA and Afro-Latinx. Readers will have the pleasure of enjoying consistent content such as recipes, wellness and workout tips, home décor ideas, beauty and fashion inspirations, and more.

Learn more about the publication by visiting www.blacksdmagazine.com

Get a free year digital subscription by clicking https://blacksdmagazine.com/black-sd-magazine-digital-access/