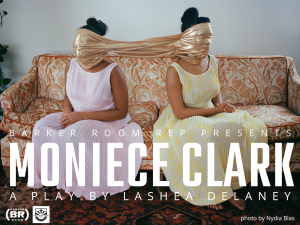 Taking place at The Broadwater, September 15 through October 2; Tickets at barkerroomrep.org

Exploring culture’s obsession with true-crime, LaShea Delaney’s Moniece Clark considers what makes one woman more valuable than another in this weird and funny play that follows Moniece Clark, a woman who has vanished from a California desert town. Her sister, Mimi, must trace her whereabouts with the help of a burnt-out television detective and the online sleuth community that has never given up on Moniece’s case. Moniece Clark brings themes of feminism, race, intersectionality, and media bias to the fore, while examining elements of true crime TV, camming (as in cam girls), Law and Order: SVU, suburban sprawl, and the desert at night.

This play marks Barker Room Rep’s return to in-person theater since the acclaimed inaugural West Coast production of Erin Courtney’s award-winning play, A Map of Virtue, which KCRW’s Anthony Byrnes included in this “Best of LA Theater 2017” roundup, sharing his excitement for the growing theater company exclaiming, “Here’s hoping for more work like this.” Barker Room Rep is committed to developing productions that elevate diverse, fresh voices in the LA theater community.

“I'm excited for Monience Clark to premiere in Los Angeles next month; it's the city where I first experienced theater, even when I spent time making work in New York, the plays always lived in California landscapes, which is heavily reflected throughout this play. Moniece Clark unfolds against the backdrop of the sprawl of the desert, with coyotes roaming the streets,” says playwright, LaShea Delaney. “I’m thrilled to be partnering with Mark Sitko and Barker Room Rep, who from the beginning truly understood the sensibility of Moniece Clark and the importance of the story, and was game to produce a show that is fun, strange and thought provoking. Theater should be as exciting as a concert and as dynamic as a contemporary art show!”

“LaShea Delaney’s Moniece Clark is the type of blazingly original play that reminds me why we started Barker Room Rep six years ago. It’s culturally relevant storytelling that challenges audiences to examine their own media consumption, biases, and comfort through a modern, hyperconnected lens,” said Mark Sitko, Founder and Artistic Director of Barker Room Rep, director of Moniece Clark. “I’m so thrilled for Barker Room Rep’s return to in-person theater and for the incredible opportunity to introduce LaShea’s captivating, close-to-home play to Los Angeles theater audiences next month.”

LaShea Delaney (Playwright) is a writer and Los Angeles native, who after spending 12 years in the New York theater scene, returned to Los Angeles where she has written about art, culture, and food for Los Angeles Magazine, LA Weekly, The Hairpin, and Indiewire. Her work is a reflection of her reality and unique ability to create strange worlds with their own rules, that center Black women who are audacious and vulnerable, like in CONDI, Delaney’s recent one-woman show, which she wrote and directed, described as a distortion of Condoleeza Rice’s life, performed at the Women's Center for Creative Work (WCCW). Passionate about the cross-section of storytelling and community in wine, Delaney is also a sommelier and wine writer.

Delaney's plays have been produced in New York at Dixon Place, Classic Stage Company, The Bowery Poetry Club, The New Ohio Theater and Barbez, in Los Angeles at The Women's Center For Creative Work and in London at the Institute of Contemporary Art. These include Among the Bugs and Crows, At the Bottom of the Flood, My Fall of Falling, Bet and Flo, Modern Venus, Great Romances of the 21st Century and CONDI. LaShea was a performer and co-creator of Bitches in Bookshops and Hardcover (Bound 2), bookish rap parodies that went viral.

Mark Sitko (Director/Producer) is the Founder and Artistic Director of Barker Room Rep. He received his MFA in Playwriting at Brooklyn College studying under Mac Wellman while serving as the Associate Artistic Director of the Bushwick Starr. His plays include Paki-man, TUBE, Gonna See a Movie Called Gunga Din, Rocky Philly, Slabtown, Tipoldemoder, and Ketamine.

For theater information and to purchase tickets, visit www.barkerroomrep.org.

ABOUT BARKER ROOM REP
Barker Room Rep is a new experimental theater company based in Los Angeles, established in 2016 with the production of two one acts; Playing Uno with Gil by Jacob Burstein-Stern and Paki-Man by Mark Sitko. Their first full-length production was Erin Courtney’s A Map of Virtue in 2017 at the Atwater Village Theater. Named for the room on the Brooklyn College campus where MFA playwriting students gather to workshop their plays with Mac Wellman, Barker Room Rep aims to showcase the work of the most creatively ambitious playwrights writing today; providing a space for inclusive, diverse, and controversial stories, and fostering artists and art that reflect these values. Applying artistic rigor, Barker Room Rep creates plays that challenge audiences to explore beyond the already known and embrace the strange.