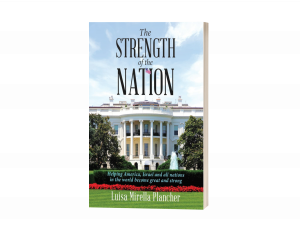 The Strength of the Nation

YORBA LINDA, CALIFORNIA, UNITED STATES, August 23, 2022 /EINPresswire.com/ -- On September 11. 2001, a series of airline hijackings and suicide attacks occurred in the United States. This very event prompted author Luisa Plancher to showcase her concern regarding today’s international conflicts in her book "The Strength of the Nation."

"The Strength of the Nation," a paragraph from an unpublished book by the author herself, came to be when Donald Trump became president in 2016. That’s when Luisa realized how that paragraph matched the president’s objective to make America great again and she wanted to contribute.

In the book’s Introduction, Luisa writes:
“Ladies and Gentlemen: I wrote this book to help President Trump and the American people in making and keeping America great and strong, so that we can become “A Beacon of Hope for Humanity” once again. And also, to motivate Christian Communities here in America and around the world, to come together in the pursuit of the Kingdom of God.”
Luisa believes that the USA is the nation mentioned by Moses in Deuteronomy 32-21, and by the Apostle Paul in Romans 10:19.
When the Jewish People did not want to listen to Moses, he said to them:
“I will provoke you to jealousy by a people who are not yet people, and by a foolish nation, I will anger you”.
And, after they crucified Jesus, the Apostle Paul said the same thing.
Now, ladies and gentlemen: that new and foolish nation is the USA.
And President Biden, with his controversial attitude, has earned for us the Stamp of Approval from our Lord.
Why? Because He has big plans for us.
Yes, indeed! Have you asked yourselves what is the ultimate Pan that God has for the Jewish People?
It is that they will become the Leaders of the Kingdom of God on Earth!
That’s why, as soon as possible, we will thank President Biden for having qualified us for our ‘New Assignment”, and will help him to get some rest. Then we place President Trump back into the White House! And he will help our Nation to go back into prosperity, freedom, and justice to the point of becoming a Prototype of the Kingdom of God, under the Leadership of Jesus, the Christ.
And this will make the Jewish People jealous, because they will realize the big mistake they made 2,000 years ago, when they killed Jesus, and they will recognize that yes indeed, Jesus is The King of Kings and the Lord of Lords.
And as they repent, they will not only become the Leaders of the Kingdom of God on Earth, but they will also reconcile with the Arabs because both of them are the Children of Abraham who received the Blessing from God in Genesis 12: 2-3.
Then, Peace will come to the Middle East! Alleluia!

Luisa Mirella Plancher married an American citizen and moved to the United States from Italy. Once in the USA, she got her degree in Political Science and pursued a career in Social Work. In 1980, she started writing, and today, she is a published author, advocating for change focusing our attention on God’s perspective toward our Nation of the USA and the entire world.
As an Italian school teacher, Luisa deems it important to provide what she can for the betterment of her new home, the USA, hence, "The Strength of the Nation." And through her work, she hopes to spark a deeper understanding of what is necessary in Making America Great Again.

Read more about Luisa’s “The Strength Of The Nation” by purchasing her book on Amazon, and looking her up on YouTube.

About Inks & Bindings:
Launching brilliant stars into the spotlight! Inks & Bindings is set to broaden horizons, revamp to perfection, and produce a masterpiece through the power of books.

Inks and Bindings is a premier self-publishing company located at the heart of the Golden State. Aptly based where fashion, entertainment, and culture thrive, the team goes all out in bringing independent authors into the sweet California spotlight.