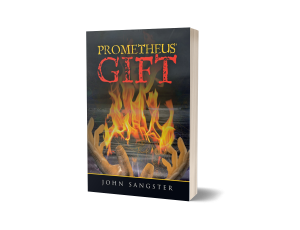 TORONTO, ONTARIO, CANADA, September 20, 2022 /EINPresswire.com/ -- How do you solve a mystery when that mystery opens up your life’s buried memories? But what if unlocking a long-puzzling mystery could be the only key to save lives and arrest an arsonist? Would you pass or take the challenge?

Hop into a new level of firefighting and puzzle-solving adventure, packed with thrill and drama in “Prometheus' Gift”, an action-adventure novel that takes its readers through the riveting story of Bill's life, the main character.

Written by prolific author John Sangster, the story starts with the occurrence of two deadly arson fires. The situation placed Bill's skill as a firefighter to work assisting in the investigation which turned his life from monotonous to stimulating in just a week. His involvement in these fires wakes up some purposely buried memories of a broken marriage thirty years ago, a heart break that still affects him years later. While helping with the investigation of these fires, the team Bill is on gets side swiped by an unmannered FBI agent, who seizes all of the team's efforts at solving the crimes.

Determined to give his community closure, Bill and the team continue clandestinely to find the culprit. In the meantime, a young man comes to town and is quickly assimilated into the community. The young man, actually a FBI agent in disguise, soon realizes that what his boss told him about the arson fires was not exactly true.

The story then shifts to more twists and turns, and gives mind-blowing revelations as the community tries to seize the perpetrator.

Sangster writes from experience. He spent nearly fifty years fire fighting, some of it as a paid wildland firefighter, most as a volunteer firefighter. He received his Bachelor's of Science in Forestry, Fire Management degree, in 1974. During his schooling, he authored a few studies for the Fire Lab in Missoula, Montana, and authored a thesis on the use of remotely piloted vehicles in fire fighting.

John worked as a sales manager for a mail order business, and eventually started his own computer repair business. After a number of deaths in John's extended family, he decided to update his notes and recollections of various fires he had been on over the years. With some inspirational words from famous author John Maclean, and the use of his editor, John was able to publish his book entitled Salmon River Fire: 30 Years An Idaho Fire Fighter, which came out in 2016.

“Prometheus’ Gift” is now available for purchase on Amazon and other digital platforms worldwide.

Bringing stories and ideas to life, one tap at a time.

Bookside Press is all about creating buzz in the digital world. Buzz that'll have each vital message be heard loud and clear. Headquartered in Canada, this hybrid publishing and advertising company aims to share the magic of its authors' books with the world. With a dedicated team of creatives and marketing professionals, Bookside Press collaborates with clients in building better brands that stand out and reach greater heights.