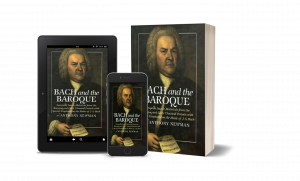 Fuel Your Ideas and Make It Happen!

Bach and the Baroque: European Source Materials from the Baroque and Early Classical Periods With Special Emphasis on the Music of J.S. Bach

A Baroque era must have!”
— Amazon Book Review

RED DEER, ALBERTA, CANADA, June 8, 2022 /EINPresswire.com/ -- Johann Sebastian Bach is familiar to us all. Even those who are only into the most modern forms of music have an idea who he is. Play Bach’s music to them and they will say they have heard this before, although they may not know what a particular piece is called.

But have we been playing the music of Bach the way he meant it to be played? Author, musician, and teacher Anthony Newman believes we have not, and that generations of musicians and music lovers have been misled when it comes to ornamentation, time, tempo, notation, and the other finer points of Bach’s music.

Modern musicians play Bach’s music in a particular way, observing certain speed, rhythm, and ornamental elements. For Newman the overall results make the music feel slow and dull. He insists the maestro himself actually insisted for his music to be played lively and fast.

To back up his statements, Newman cites various sources and examples from the era Bach composed his music in --the Baroque Period. A period when music was actually played with lively spirit. Newman challenges what generations of conventional musicians have come to insist on how Bach’s music was performed.

Have you ever wondered how the music we now call the “classics” were actually played when they were not yet considered classic but modern music? Newman lets us know how Baroque period music, as well as the music of Bach, was really played.

What you will find may surprise you, considering how many generations of musicians have played classical music a certain way.

“This book is an essential text for any professional musician, student of music, or serious amateur player or lover of Baroque music. Filled with cogent explanations and musical examples, Newman teaches us how to make Bach a more glorious experience,” one reader critiques.

This book and other titles will be featured in the Toronto Book Festival on June 11 and 12 this year.

Often referred to as the “high priest of Bach”, Anthony Newman was born in 1941 and came to appreciate music at an early age. By the 1960’s he was already an accomplished harpsichordist. He could also play the pianoforte, organ, and piano, and is also a conductor, composer, and teacher of music.