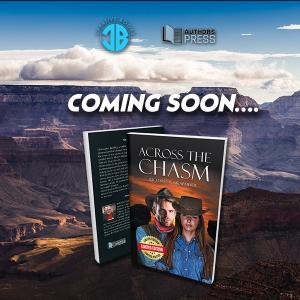 5 limited-edition copies of Grabmeier's time-traveling novel will be printed pre-publication, available for purchase at the 2022 Manila International Book Fair!

This is the perfect read for those who enjoy fictional tales of fantasy-driven romance, as well as mystery and thriller stories and historical fiction elements.”
— Tony Espinoza, Hollywood Book Reviews

MANILA, PHILIPPINES , August 30, 2022 /EINPresswire.com/ -- Ahead of its release, Authors Press will be bringing the only 5 limited edition copies of Richard H. Grabmeier’s Across the Chasm that was released pre-publication at the 2022 Manila International Book Fair this coming September 15-18, 2022. The limited edition copies feature a gorgeous gold and red “limited edition” emblem on the cover and are expected to round up potential readers during the release. In contrast to Grabmeier’s preceding technical and light-read works backed with his staggering life achievements and background, Across the Chasm delves into the author’s imaginative side. This fictional piece centers on the time-traveling adventures of Christopher Redding, a middle-aged businessman who finds himself in the middle of a psychic phenomenon triggered by a young woman and will change his life for the better…..or worse.

After finding himself in the body of another man in Mexico during the Mexican war, Chris’s already hectic life is further driven into shambles because as fate has it, he has to choose between his family and the woman he is now living with and has grown to love. However, Chris’s story does not end there….

Richard H. Grabmeier who has credible experience in writing as a Heavy Equipment
instructor and technical writer; served as Military Assistance Advisory Group, training soldiers in Vietnam; training workers in the construction of early computer memory systems; a retired board chairman and an insurance company president. Grabmeier is now retired and is spending the majority of his time writing novels, Across the Chasm is his fourth published novel.

Catch the limited edition of the book at the 2022 Manila Book Fair before it officially comes
out! Book copies are soon to be available on Authors Press.

About Authors Press
Authors Press is an online publishing company and book reseller catering to the needs of
both experienced and aspiring authors as well as readers. They offer the best publishing
solutions for full-time and independent authors. The company’s team of proofreaders,
editors, designers, and publishing professionals is committed to achieving industry
standards for their client’s work to be published, marketed, and sold.
Please visit www.authorspress.com for more information.